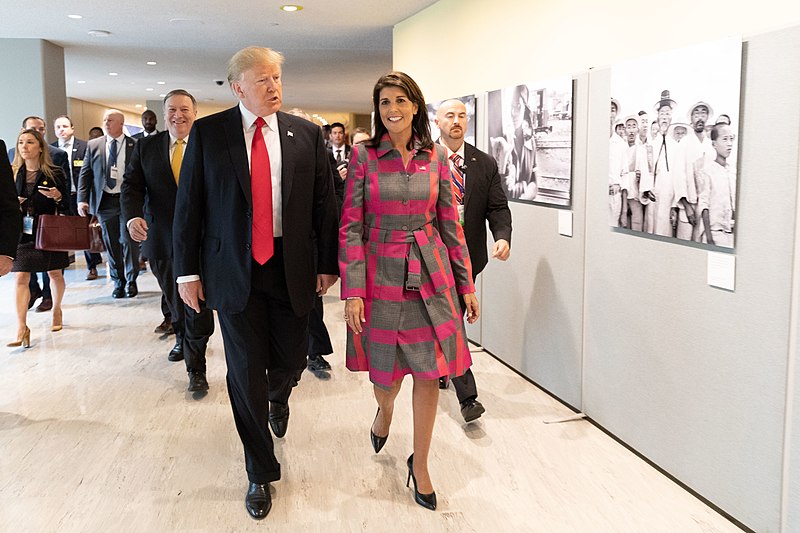 Rather Than Merely Running for President, Is Nikki Haley Auditioning To Be Trump’s New No. 2?

Rather Than Merely Running for President, Is Nikki Haley Auditioning To Be Trump’s New No. 2?

Minimal Left BiasThis article has minimal left bias with a bias score of -24.9 from our political bias detecting A.I.

Opinion ArticleThis is an opinion article. As such, the content below expresses the viewpoint of the author, not our site as a whole.

I hope that we can agree on this much: former United Nations ambassador Nikki Haley’s political ambitions didn’t end when she resigned her post last year.

Moreover, those ambitions clearly lead to the presidency for herself, post-Donald Trump.

Finally, that her current circuit through the cable news shows isn’t only, or even primarily, about selling copies of her new book, With All Due Respect.

Long a rising star within the Republican party, Haley is using all of the diplomatic skills she honed representing the United States before the world body to simultaneously explain how she would be different from Trump while all the while defending him from the worst of the attacks against him.

As Haley seems almost too happy to point out in interview after cable interview, 2024 is a lifetime away in politics.

Which makes her current little publicity lap a little curiously timed if considered from a political perspective.

Haley, like so many Republicans, truly is just seeking an audience of one: that being the one currently sitting in the Oval Office.

Would it be really beyond the imagination that Haley is perhaps leaving a little bug in Trump’s ear that he would be better served with her at his side as his 2020 running mate?

Let’s be honest: Trump rarely sings the praises of Vice President Mike Pence. He hardly mentions Pence at all. Actually, Trump recently may have tried to throw Pence under the bus in an effort to save himself in the ongoing impeachment inquiry.

By contrast, Trump has never but sung the praises of Haley, who previously served as the 116th governor of South Carolina.

If Trump survives certain impeachment, and heads towards what remains a dicey bid for re-election, he and his team may attempt a maneuver which hasn’t been tried by an incumbent president in more than 40 years: dumping the incumbent vice president in favor of a running mate who is perceived to offer more political benefits.

Trump, after all, suffers a tremendous gender gap, with women more likely than not to reject him as a candidate. Would his campaign team think that Nikki Haley could help close that gap?

Of course, the last time this running mate switcheroo was attempted, Gerald Ford was president. He ditched Vice President Nelson Rockefeller in his 1976 election in favor of a rising Republican at the time named Bob Dole.

Even that gimmick couldn’t save the ticket, and Ford/Dole went down to defeat to Democrats Jimmy Carter and Walter Mondale.

Agree or disagree with something in this article? Share it in the comment section and see what others think.

Newer Post
Trump’s Decision Is Clear: Either Admit to Racism or Fire Miller Now
Older Post
No, Mr Bloomberg, We Do Need a Wealth Tax: Too Much Income Inequality Is Bad, Even for the Rich